Crowded Wichita Emergency Rooms Can Increase the Risk of Misdiagnosis 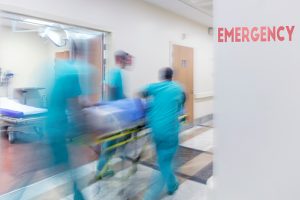 Diagnostic errors are a significant threat to patients, especially those in dire need of immediate medical attention. A patient seeking treatment must place great trust in a doctor’s ability to correctly diagnose an injury or illness. Yet medical facilities that are busy, understaffed, or otherwise chaotic can result in an increased likelihood of suffering from an illness or further complications because of a diagnostic error. Patients who are injured by such medical malpractice have legal rights that must be protected.

The Deccan Chronicle reported findings of a study which examined how patient care is affected when emergency rooms are so crowded that patients must be treated in a hallway. Patients were more likely to be misdiagnosed or experience a delay in receiving treatment. This may be because doctors were less likely to receive accurate information from the patient in such a setting. Researchers suggested that emergency room patients ask for a private area to discuss any sensitive issues with a doctor. While the staff may not be able to accommodate a private room, they are often able to facilitate some privacy beyond that of an open hallway.

When diagnostic errors occur, legal responsibility may fall upon a negligent doctor or the medical facility which employs that doctor.

A unique case out of the Hutchinson Correctional Facility illustrates just how complex liability can become in the case of diagnostic errors. According to the Wichita Eagle, an inmate visited the infirmary complaining of symptoms he had experienced for months. But in addition to his usual numbness and tingling in the legs, the inmate now reported that “it felt like something was eating [his] brain.” Incredibly, something was indeed eating his brain. The inmate spent four months losing his vision and speech while fungus in his brain slowly killed him.

The inmate’s family filed a lawsuit naming multiple defendants. Among them is Corizon Health, the largest for-profit provider of contract prison healthcare services in the United States. The lawsuit also named 14 Corizon employees whose negligence could also cause their employer to face liability. In such a case, the Kansas State Department of Corrections could also face liability for negligent treatment of its ward.

Our medical malpractice attorneys believe that doctors, healthcare facilities, assisted living facilities, and correctional facilities should all be held accountable when their negligence causes diagnostic errors. The effects of such errors can impact a victim’s life - as well as those of family members.