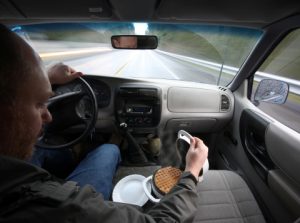 Preventing collisions requires every driver throughout Wichita to respect the rules of the road, exercise reasonable care when operating a vehicle, and make safe choices. Unfortunately, a personal injury lawyer knows that some drivers underestimate the risks of certain common behaviors. For example, many people eat food or drink beverages when they are driving, despite the fact that this can significantly increase the risk that a car wreck will occur.

Eating and Driving is a Common But Dangerous Behavior

Eating and driving is very common. According to the New York Daily News, a survey of 1,000 drivers showed that well over half of the motorists regularly consume beverages and food. A total of 83 percent of the survey respondents said that they drank beverages while they were driving a motor vehicle and a total of 70 percent said that they ate as they drove.

Eating and drinking while driving both require you to remove at least one of your hands from the steering wheel of the vehicle. Both also require you to focus at least some of your mental energy on making sure you get the food or drink into your mouth without spilling. The human brain is not very good at multitasking and shifting its attention, so the cognitive distraction from focusing on the food is dangerous. You may not notice what is going on around you, and you will be slower to react.

Some of the foods that people eat and drink are more dangerous than others. For example, when asked to name the most high-risk foods and beverages to consume while driving, motorists listed:

When people eat hot foods, the risk of a spill is a significant one. A spill could cause the driver to suffer burns, which could result in an involuntary reaction and cause the motorist to lose control of the car.

Many of the crashes that occur in the United States involve motorists who are distracted by the fact that they are consuming food. Around 80 percent of accidents that occur involved a driver who was eating at the time of the crash. Around 65 percent of near-miss incidents where collisions almost happen involve a driver who is eating. While eating may not be the only or primary cause of these collisions, it can play a role in the fact that the drivers were not able to avoid the danger.

Unfortunately, many motorists don't see eating and driving as a big problem. The New York Times recently reported on one motorist who had received a traffic citation because he was eating a burger as he drove. The law enforcement officer insisted he could not just eat his burger as he operated his vehicle, but the driver felt that he had not violated any rules and was planning on contesting the ticket. Most drivers never even receive tickets at all because there aren't clear laws prohibiting eating while driving.

Motorists need to make the smart choice and avoid consuming food or beverages if they want to reduce the very serious collision risks that eating behind the wheel can present.