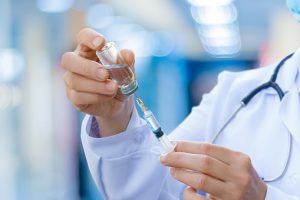 An $8 million program featuring a special soap is being aimed at combatting a “nightmare” bacteria found in hospitals and nursing homes.

The goal of the mission, funded by the U.S. Centers for Disease Control and Prevention (CDC), is to stop antibiotic-resistant superbugs that kill thousands yearly, according to National Public Radio.

The program involves hospitals looking to nursing homes to stop drug-resistant infections and is taking place at 50 facilities in Illinois and California.

The effort recognizes that such “superbugs” don't remain isolated in one hospital or nursing home but move quickly through a community.

At least 2 million people in the U.S. become infected with some type of antibiotic-resistant bacteria each year, and about 23,000 die from those infections.

Hospital patients and residents of nursing homes are particularly vulnerable to such infections.

A goal of the program is to stop superbug infections in nursing home residents because those infected often wind up in hospitals.

Some of the most common bacteria in health care facilities are methicillin-resistant Staphylococcus aureus, or MRSA, and carbapenem-resistant Enterobacteriaceae, or CRE, often called "nightmare bacteria.”

E.Coli and Klebsiella pneumoniae are two common germs that can fall into this category when they become resistant to all antibiotics.

Healthy people are usually able to avoid CRE infections. Such infections usually happen to patients in hospitals, and residents in nursing homes or others in healthcare settings, according to the CDC.

Patients whose care requires devices like ventilators to help with breathing, urinary or intravenous catheters, and patients on certain antibiotics are most at risk for CRE infections, the CDC said.

Chlorhexidine is a medicine known as an antiseptic antibacterial agent. It is a soap used to clean the skin after an injury, before surgery or before an injection, or to clean the hands before a procedure. It works by killing or preventing the growth of bacteria on the skin, according to the Mayo Clinic.

Doctors and health care workers in Illinois and California are using chlorhexidine to reduce infections by bathing patients in it.

Hospital intensive care units use chlorhexidine frequently to prevent infections. Such an infection-control protocol as bathing residents in chlorhexidine is new to many nursing homes.

The poor record of many nursing homes in terms of stopping and addressing infections in residents is partly why hospitals are looking to nursing homes to stop these drug-resistant infections.

Nearly 75 percent of all nursing homes in America have been cited by federal inspectors for lapses in infection control, more than any other type of health violation. That’s according to a four-year analysis of federal inspection records by Kaiser Health News, a nonprofit news site.

Repeat citations of such poorly performing nursing homes is common because financial penalties are rarely high enough to prompt changes. The federal Centers for Medicare & Medicaid Services said that most infection-control violations have not justified fines because they did not put residents in certain danger.

The pro-chlorhexidine effort in Chicago facilities includes promotion of hand-washing and increased communication about which patients carry the drug-resistant organisms.

The effort in Orange County, California has yielded a key finding: that patients move between hospitals and nursing homes far more frequently than officials thought.

Contact Warner Law Offices in Wichita, Kansas today for straightforward, honest legal advice for questions you may have on nursing home negligence, or any type of medical negligence that may result in legal action.