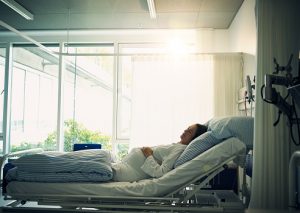 A key measure of a society's development is how well it protects mothers and children during childbirth. The U.S. has one of the highest levels of maternal death within the developed world—in some cases reflecting the statistics of Third World countries. As non-profit journalism site ProPublica recently reported, every single year in the U.S. 700-900 women die and 65,000 come close to dying during pregnancy and childbirth.

In fact, women in America are three times more likely than Canadian women to die during the maternal period (the time frame from the beginning of pregnancy through one year after delivery/ termination). And while maternal mortality rates have fallen dramatically in every other developed nation, they have spiked dramatically in the U.S. over the last 15 years. And in addition to the hundreds of mothers who die every year, some 23,000 babies die too.

Of course, a poor outcome in and of itself does not necessarily mean a doctor, nurse, or other health care worker failed to do their job correctly and meet the standard of care. As our Wichita medical malpractice attorneys can explain, this is what must be shown in order to prevail in a medical malpractice lawsuit in Kansas.

Kansas is well known for having one of the most stringent medical malpractice damage caps in the nation, with non-economic damages – such as pain and suffering, emotional distress and loss of care and companionship – for claims accruing between 2014 and 2018 capped at $300,000, those accrued between 2018 and 2022 set at $325,000 and those accruing after 2022 set at $350,000.

So even if juries award damages in the multi-million-dollar range, if a significant portion of that award is non-economic, it’s up to the judge to reduce that amount. Kansas does allow punitive damages, but only in an amount limited to defendant's highest gross income or a maximum of $5 million, whichever is less.

It’s important to note, though, that Kansas does not cap economic damages, which are damages for tangible, measurable losses arising from malpractice. Examples of economic damages include medical expenses and lost future income.

Another example of economic loss in Kansas death cases are damages for loss of spousal, parental or “filial” care. (“Filial” care is the care provided to a parent by a child). In medical malpractice cases resulting in the death of a spouse, parent or child, the surviving heirs at law can be compensated for the full extent of those economic losses.

In addition, Kansas has a two-year statute of limitations in which to file a claim, meaning just two years from the time the injury occurred or when it reasonably should have been discovered. There is a four-year statute of repose, meaning even if the injury wasn't discoverable within four years, no case older than that can be filed by law.

And finally, K.S.A. 65-4901 allows either party to request a medical malpractice screening panel to screen cases before they go to trial.

The good news however is Kansas doesn't require any pre-lawsuit notice of intent or a certificate of merit from an expert witness, as many other states do.

According to reporting by the Kansas City Star, plaintiffs face an uphill battle in Kansas courts.  Therefore, it is very important to hire an attorney with a demonstrated track record of trial success.

The insurance companies and their defense lawyers know which plaintiff lawyers have successfully tried cases and which ones never go to trial. Unfortunately, the general public does not know this without a little research or a referral from other lawyers who do know the difference. The lawyers who advertise incessantly on TV usually never set foot in the courtroom. If a lawyer is not willing or able to take a case to court, they end up taking the low-ball offer from the insurance company adjuster.

Guess which lawyers get the best results for their clients?