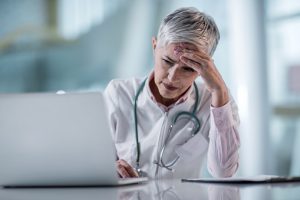 In 1997, the National Patient Safety Foundation published a study on the frequency of medical errors that impacted patient care. This study has stood for 20 years, until researchers at the University of Chicago sought to update it.

From May 12 to June 26, 2017, the researchers surveyed over 2,500 American adults to understand the frequency, causes, and effects of medical errors.

The research, published at the end of last year and explained by Study Finds, found that just over 1 in every 5 Americans have personally suffered some form of medical error in their care. Of the survey respondents, 21 percent claimed to have been personally impacted by medical errors, while 31 percent recalled encountering a medical error with someone else whose care they were involved in. The most common forms of mistakes were those related to diagnosis or the communication between patients and providers. Locations which focused on outpatient care were the most likely to see medical mistakes arise.

One thing the survey uncovered, according to a statement issued by Tejal K. Gandhi of the Institute for Healthcare Improvement, was the need for a systematic approach to the issue of medical mistakes that focuses on all areas of care, including those outside the scope of hospitals. It also noted the role of patients in owning the quality of their care.

While the study found that only half of respondents who felt they were victims of medical errors reported the event to the facility where the error occurred, that number was tied to a strong belief that patients have a responsibility to help prevent errors in their care. The respondents noted a belief that a higher degree of responsibility lies with the medical professionals, but saw value in being personally active.

Linda K. Kenney, president of the Medically Induced Trauma Support Services, noted of the results that, “patients are willing, and expect, to be involved in their care. The fact that many people who experienced an error spoke up about it confirms that patients and families are vital to informing health care organizations about harm and how to prevent it in the future.”

The first step when you suspect a medical error should always be alerting the provider. Earlier detection and awareness of problems usually makes solving them easier and with fewer physical and emotional impacts. If you have faced a medical error while in the care of a doctor or medical institution, contact Warner Law Offices to discuss your options.