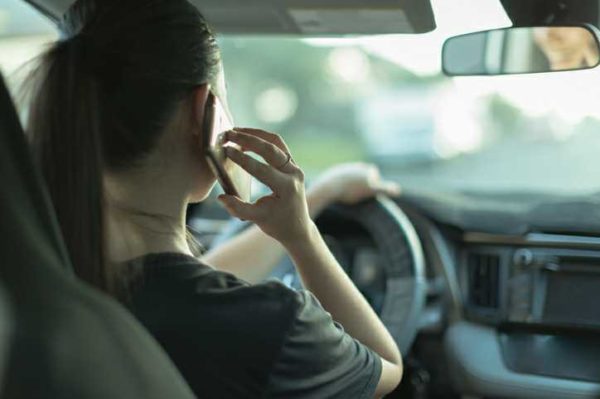 In Kansas, reading, typing and sending text messages is illegal and is enforced as a primary traffic law. All cellphone uses are prohibited for drivers with learner's permits and intermediate license holders. For all other drivers, there is no law banning non-text uses of cellphones.

According to national crash data released by the NHTSA, distracted driving caused 2,841 traffic fatalities, and an estimated 400,000 injuries across the U.S. in 2018. These figures are really only based on crashes where physical or digital evidence was left behind, or where drivers admitted to driving while distracted.

A recent distracted driving study conducted by insurance market place website The Zebra found that texting was the leading cause of distraction.

Distracted driving is much more pervasive than we think and it doesn't always involve cellphones. According to the study, drivers also engaged in multitasking and even bizarre behavior in some cases.

The survey revealed that:

Why distracted driving is so dangerous

Driving requires keen attention to the road and awareness of signs, signals, changes in traffic and actions of other drivers. When drivers are distracted with cellphones or other activities, anything can happen within seconds. In some cases, distracted driving crashes can occur at full speed when drivers make no attempt to stop or avoid a crash.

If you or a loved one was injured in a crash with a distracted driver, it's important that you speak to an experienced Wichita car accident attorney as soon as possible. Proving negligence often requires a thorough investigation, including gathering cellphone records, checking the at-fault driver's social media posts, speaking to witnesses and hiring a crash reconstruction expert. That's only half the battle.

Getting compensated for medical expenses, lost wages and other losses associated with your crash can be difficult. Insurance companies aren't willing to readily lose money over a crash. In fact, they'll use every trick in the book to avoid paying you the money you're entitled to.

That's where the legal team at Warner Law Offices come in. We have more than 25 years of experience helping injured motorists in the Wichita area maximize their compensation. To schedule your free and confidential case evaluation with our legal team, contact us online.