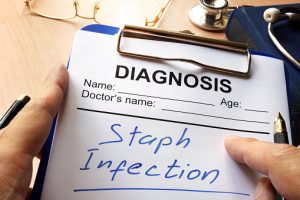 When being treated at a hospital, we’d like to think that medical professionals are providing the best treatment possible, but hospital-acquired infections remain a serious health risk to patients.

Over 119,000 people suffered from bloodstream staph infections in the United States in 2017 and nearly 20,000 died, said a report from the U.S. Centers for Disease Control and Prevention (CDC).

According to the Occupational Health & Safety magazine of Dallas, Texas, Staphylococcus aureus (staph) is a germ found on people's skin. Staph can cause serious infections if it gets into the blood and can lead to sepsis or death. Staph is either methicillin-resistant staph (MRSA) or methicillin-susceptible staph (MSSA). The germ can spread in and between hospitals and other health facilities, and in communities.

People are at higher risk for staph infection when they have surgery or stay in health care facilities, have medical devices in their body, inject drugs or when they come in close contact with someone who has staph.

Reducing the spread of germs

Hospitals have made significant progress, but staph infection remains a priority for healthcare providers, according to the CDC. It comes down to a need to focus on reducing the spread of germs.

Among other strategies that might be needed for some patients is decolonization, which is when topical treatments are used to eliminate Methicillin-resistant Staphylococcus aureus (MRSA) from a patient.

CDC findings show that hospital infection controls have reduced staph infection rates in the U.S., but that such success is slowing, and staph remains a threat.