Home » Blog » What are the leading causes of truck accidents?

What are the leading causes of truck accidents? 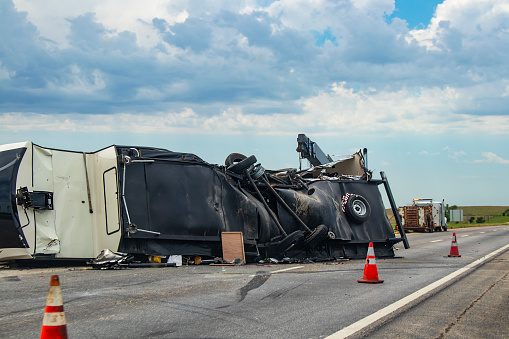 If you ask the average driver how he or she feels in the presence of a large tractor-trailer truck, the answer may be "nervous." This is for good reason — semi-truck accidents happen unpredictably and one crash can injure or kill multiple people.

FleetOwner cites the Federal Motor Carrier Safety Administration's (FMCSA) 2007 Large Truck Crash Causation Study (LTCCS). While the data used in the study may be more than a decade old, it sheds light on three key factors in truck accidents that are either the fault of the driver or the trucking company.

With the help of the National Highway Traffic Safety Administration (NHTSA), the FMCSA conducted an in-depth analysis of 963 incidents out of 120,000 fatal and injurious crashes involving 141,000 trucks.

Driving too fast for conditions

Truck drivers often run on tight schedules, and sometimes have to make multiple deliveries with limited time to make them. The problem is, trucks aren't exactly built for speed and precision. When fully loaded, a semi-truck can weigh 20 times more than the average passenger car. They generally take more time and distance to slow down and can inflict far more damage in a crash.

According to the LTCCS, approximately 23 percent of truck crashes were speed-related. In most speed-related truck crashes, the driver was traveling at a speed that was deemed "too fast for conditions." This is common when:

The LTCCS found that in the 963 crashes, 29 percent of trucks experienced brake failure. Brake failure is often the result of:

Traveling unfamiliar roadways can be confusing for most drivers, as they can be unpredictable. Unfamiliarity with roads was found to be a factor in 22 percent of the truck crashes analyzed in the LTCCS.

This includes not planning in advance or being aware of distances, routes, turns, intersections, and changes in speed limits.

Additional factors mentioned in the LTCCS include trucker fatigue, drug use (both prescription and over-the-counter), making an illegal maneuver, distraction, tire problems, and alcohol use.

In 2018, a total of 4,136 traffic fatalities involving large trucks occurred across the United States. Out of those deaths:

That's why our highly skilled legal team is dedicated to holding negligent truck drivers and trucking companies accountable. We know how to investigate truck crashes, find out how they happened, and identify who was responsible.

Not only can we seek justice for you and your family, but we can also help you recover all medical expenses, lost wages, and non-economic damages owed to you. To learn more, contact our firm online. We offer free case evaluations and won't ask for any money unless we win your case.