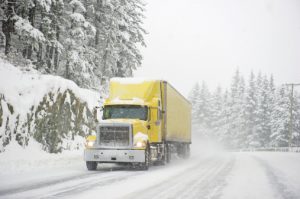 Understanding obligations when it comes to snow and ice removal is essential because an accumulation of snow or ice on a truck could contribute to the risk of truck accidents in Wichita.  Snow and ice could fly off a truck and could injure a pedestrian or could affect other motorists. In one cases, for example, ice falling off a truck resulted in a driver being injured when his windshield was broken. Falling snow and ice could impede visibility and cause a driver to lose control of his car.

The specific laws for snow and ice removal differ by state. Trucking Info indicates there is a new trend towards more states imposing requirements for removal. One example of pending legislation would give law enforcement the authority to issue citations even if the snow and ice did not actually fall off the truck. Just having an accumulation could lead to a trucker getting pulled over and fined anywhere from $25 to $75.  If the truck driver failed to fulfill an affirmative obligation imposed on him to remove snow and ice and an accident occurred causing serious bodily injury or death, the trucker would be fined anywhere from $200 to $1,000.

Laws imposing an affirmative obligation on truck drivers to remove snow and ice can increase the chances a trucker will be found liable when an accident happens because of snow falling off the truck.  The victim of the collision could argue the trucker was negligent and could point to the safety law requiring the trucker to remove snow and ice as proof. Failure to fulfill this safety obligation would create the presumption of negligence, so it would be easier for the victim to succeed in a civil claim for damages.

Truckers are concerned about the implications of more laws imposing obligations for snow removal. One issue is the question of what is reasonable is open for debate. Snow removal from the top of a truck can be really difficult. The top of a tractor trailer is made of fiber glass and the fiber glass cannot be stepped on. It is also prone to scratching. Drivers can purchase special snow-throwing equipment to remove snow, but this is cost-prohibitive for most truckers. Penske indicates some truck drivers use truck washes to try to get snow off, but this can take a lot of time. When deliveries have to be made on a strict schedule, it can be difficult for a trucker to actually have the time and equipment to successfully remove snow. Still, with more states imposing requirements for snow removal as a safety issue, truck drivers and trucking companies will need to find a solution.